The blue book of JavaScript & a contest

When I received my personal copies of the book back in October, I was of course overjoyed at being a Published Author. Nonetheless, I was sorely disappointed at one feature, or rather, the lack of one feature.

The pages of my book were gray, even though they were supposed to contain some blue accents. Unfortunately all blue colours, shades and nuances had been replaced by their gray equivalent, except on the cover. That made the book harder to read.

Meanwhile the problem has been solved, and gray copy owners can win a blue copy by participating in my contest.

Initially I assumed someone at Peachpit had decided to lower production costs by leaving out the second colour. (Later I heard that Peachpit never does this.)

At that particular point in time Wendy Sharp, my editor, was on sick leave, so I couldn't discuss this problem with her. I sighed a bit, reminded myself that despite of the grayness I still was a Published Author, and left it at that.

When Wendy returned to work a few weeks later, she asked me how I liked the book, and I replied something like Great, except of course for the gray. I assumed she knew about the substitution, but instead she was very surprised, grabbed a copy, did some investigating, and finally told me the printer had made a grave mistake: he had forgotten to add the blue colour!

We faced a problem. By this time the book had already been released officially, was being distributed, and the first eager web developers were ready to buy it.

Besides, although the printer would deliver a proper, blue version of the book ASAP, actually getting these new copies to Peachpit's distribution centres would take a few weeks more, and from there they still had to be shipped to the retail shops.

We really didn't want to halt the book distribution, tell people We're very sorry but it'll take a few weeks more and wait for the blue copies to arrive.

Therefore Wendy and I decided to hush the whole thing up and continue to distribute gray books. When the blue book arrived, Peachpit would silently start to ship it instead of the gray one. The left-over gray copies would be destroyed. I assume that has happened by now.

So if you own a gray copy of my book, you have a valuable collector's item on your hands.

The code examples in the main text have the same problem: they are supposed to be blue, and their gray equivalent is hard to read. I already received a few complaints about these issues.

A true fan would not hesitate, run to the bookstore and purchase a blue copy, too. However, I think that some owners of gray copies will hesitate to fork over money yet again for a book they already own.

Therefore I decided to run a contest in which gray book owners can win a blue copy, too. This will allow them to keep their valuable gray copy in pristine condition by safely locking it away, using the blue copy in their daily work.

In order to get you in the mood, here's my own serving suggestion: 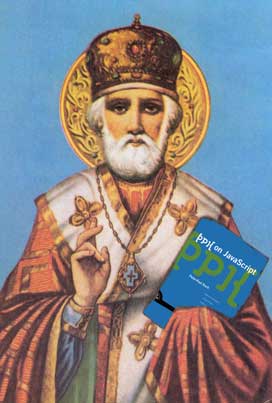 Now I'm an indifferent designer at best, and I'm sure many of you can do much, much better. Show me your ideas! Create a serving suggestion, put it online somewhere and send me a link. Please select the "Contest" subject.

Entries will be accepted until 21 April, at which time the contest will close and the jury (consisting of me and my cat) will take a final decision. Winning serving suggestions will be published.

Technically, what the printer did was substitute a different color for the blue. They reversed a number in the CMYK details. It just happened that the reversal turned the blue to gray--it could have been some other shade entirely, which would have been even more of a shock!

Right, I didn't know that. Thanks for the clarification.

Can we download a scan of the cover somewhere (in a reasonable format), or do I need to scan the cover of my gray issue? :)

Note that the cover text is incorrect; the image contains the first version that I rewrote later. Fortunately I think that most contest entries will use a downscaled version of this image, where the text will be unreadable anyway.

Cool, another rare book in my library :-)

Is the contest limited to one entry per person, or can I display my utter lack of design skills multiple times?

Do whatever you like. The more entries, the better.

But how do you know if a contestant has a gray copy or not?
;-)

By any chance can we see a side by side comparison of how pages look different between the gray and the blue versions? Looking through my copy I can see how it may look improved with the color alteration. I was just a litter curious about the differences.

Would this suffice? http://www.geenstijl.nl/paginas/ppk_matters.jpg
Besides, I still need you to sign my rare copy ;)

PPK, your book has exactly the right size for us ;)
http://www.domnodes.org/ppk/ppk2.jpg
(just kidding)