One of the things that keeps me fairly upbeat these days is playing board games and D&D with my friends online. Since others might want to do the same, I thought I’d jot down some notes on how I do it.

I briefly tried Tabletopia but didn"t like it. I understand why they built the interface as they did, but I found it very hard and very confusing to use, and it took us about 45 minutes to even start understanding the system. Granted, we picked Teotihuacan for our test game, which may not have been the best of choices.

So I continued using my homebrew system, and it works great so far.

I use Whereby (the former appear.in), a WebRTC service that works absolutely GREAT. I totally recommend it to everyone for your online communication needs. The greatest thing about it is that you just go to a URL, ask the people you want to communicate with to go to the same URL, give permissions, enter the room, and start talking. No sign-ups or logins or whatever.

Besides, fuck free. The free Internet is slowly coming to an end and you should pay for services you like and use, or they won’t survive (or sell your data; see also Zoom).

Whereby works on modern Chromium-based browsers, and also in Firefox (though I haven’t tried Firefox on Android yet). It does not work in Safari iOS, but an app is available that works as simply as the web client.

Then figure out how many devices you own that you can use. On the whole, I send out three streams: my 'social' stream (my face, basically) from my laptop, the main board stream from my iPad, and a secondary board stream from a Samsung S6 I happened to have lying around. I occasionally use my real Samsung phone (an S7) as a third cam, for instance to make sure that everyone has the same bits and pieces on mirrored player boards.

Plug in all devices you use, and make sure any phones are on at least 25% charge or so before starting. My Samsung phones, especially, tend to spend a lot of juice on keeping the streams running, and even though plugged in all the time they might end up with less battery charge after a gaming session.

Mute Whereby on all devices except for your social stream. One very annoying thing I noticed is that, both on the iPad and on the Samsungs, it is impossible to turn off the sound completely. Therefore you need to do two things:

You can only mute the output once everyone else has joined the stream. If someone drops out and re-joins you must mute them again. This is annoying; but it’s caused by idiotic device vendors not allowing you to mute the sound completely by using the provided hardware buttons — don’t ask me why they took this stupid step.

Now ask the others to join you. If possible and necessary they can also add their own cameras, for instance to show their player boards.

With the technical set-up out of the way, you should pick your game. I found that there are two absolute necessities here:

So you might need to buy the same game as your friends. If you are in the Amsterdam area, please support your friendly local game store Friends & Foes instead of the big online retailers. Friends & Foes deliver in Amsterdam (I just ordered Tzolkin from them).

The two games I played most often so far are Azul and Alchemists. I am currently gearing up to try Madeira, Istanbul and Tzolkin; they should work as well.

Azul, Madeira, and Tzolkin have no hidden information at all. They have a variable set-up (and in case of Azul this is repeated each round), but that should be no problem.

Appoint one player or group of players as the Master; the other ones have Copies. The Master players draw all the randoms and show them to the other players, who copy them on to their Copy boards. Having the Master set provide all random draws is very important, since usually quite a bit of design thought went in to deciding exactly how many of one type of card or tile are available. These distributions should not be disturbed!

Wnen I stream Azul, the main camera is on the central part with the available tiles. Other players can copy that if they like, but it’s not really necessary if the stream is clear enough. My secondary camera is on my own player board, so that everyone can see what I’m doing.

During the game all players clearly state their moves; for instance “I take the two blues with the star, and I put them on my three row.” I take the tiles from the central part, and the other players see me doing that, so they can correct me. They don’t see my copy of their playing baords, but that has never been a problem yet, as long as everyone gives clear instructions.

After a round has ended but before scoring I start up my tertiary camera to stream my copies of everyone else’s player boards, just to make sure no mistakes were made. Then I score each player’s board while showing it on camera. We repeat our final scores orally, just to be sure, and then the Master player sets up for the next round by drawing random tiles from my Master bag.

Alchemists does have a little bit of hidden information: random ingredients drawn, and random helper cards we always call Friendly Friends. (I forget their official name.) The Master player draws these cards for me and shows them on their camera without looking. I take the corresponding cards from my own copy of the game. This works fine, and the distribution of ingredients and Friendly Friends remains intact.

Alchemists really only needs a Master main board stream and social streams; there is no reason to add more cameras.

Although Alchemists’ board is pretty big, it doesn’t contain all that much information, which is good for online gaming. I just need to see which artifacts and ingredients are drawn (and copy them to my own board), and where players place their action cubes (and copy them as well). If I can’t see it clearly I just ask, and that works fine.

Part of Alchemists becomes much easier. In real life every player needs a beautifully-designed but sometimes cumbersone player contraption to both visualise their research and hide it from the other players. 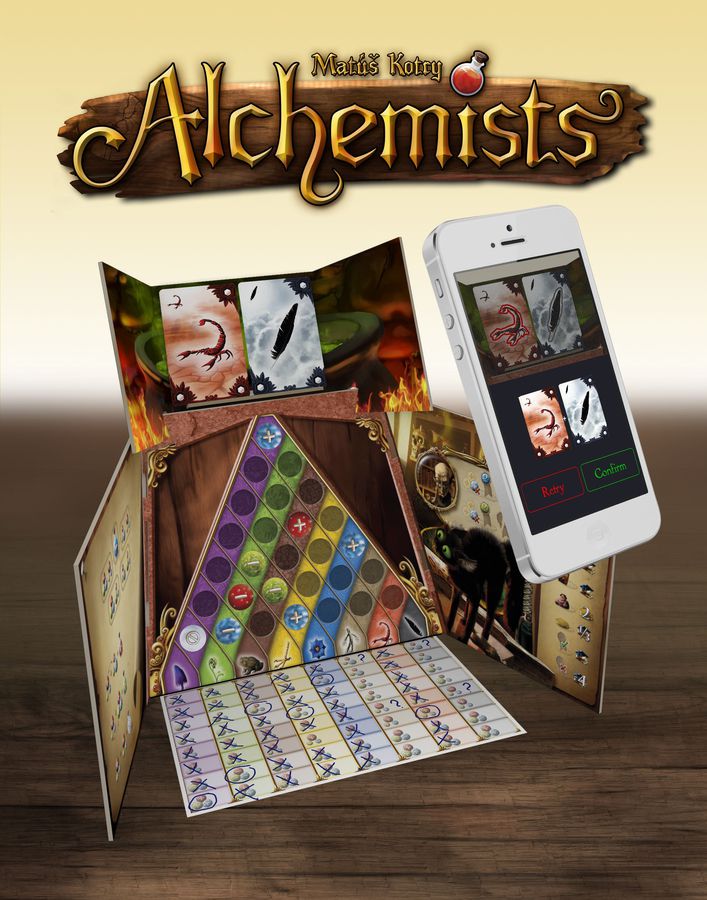 Online, it’s not necessary, and I find that my research and thinking flows much easier. Other players cannot see my board, and that gives me a lot more space to work with.

I haven’t played Madeira, Istanbul and Tzolkin yet, but they do not contain hidden information; just start-of-game randoms, plus the random buildings that occasionally appear in Tzolkin and the bonus cards in Istanbul. I do not think these will cause a problem.

The bigger problem might be that their boards are much more involved, and there’s a lot of game state to track. I might need to use two cameras to stream them accurately; I’m not sure yet. We’ll figure that out once we do the first session.