BlackBerry user satisfaction, media queries and asset downloading, and turning the cloud inside out

Three news items that have nothing to do with each other, except they caught my eye yesterday and today, and might be of interest to others, too.

RIM is at risk because its natural market is saturating and many of its customers are considering a switch to other platforms. The company may be able to bumble along in this situation for years before the problem comes to a head, but once a migration away from BlackBerry starts it would be almost impossible to stop.

He comes to this conclusion by studying RIM’s number of new subscribers per unit sold, and gross margin per unit, both of which are dropping. Read his article for the entire argument.

Tomi Ahonen replied, saying that BlackBerry is big among the youth market, and in a few countries such as Venezuela and Indonesia. Although I generally find Tomi’s reasoning compelling, in this particular case I feel that his reply is a non-sequitur. Sure, he’s right, but so is Michael Mace, and the two things could take place simultaneously. Apparently RIM is sliding down-market, which is not necessarily bad, but does mean it might have to change its basic company economics. Since I know nothing of economics I’ll leave it at that.

On one point, however, Tomi is right and Michael is wrong. Michael quoted Nielsen research that shows which percentage of current US users of a certain OS would choose that OS again for their next phone: 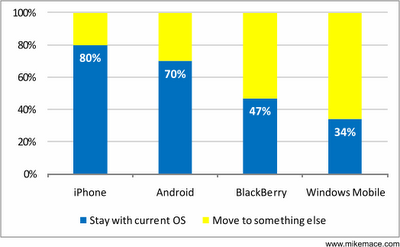 (Curiously, I cannot find this particular datum in the post Michael linked to.)

Seems terrible for RIM, right? 53% of US BlackBerry users wants a different platform. Mayhem and corporate death will ensue.

Except, as Tomi points out, it won’t. Roughly one-half of the US BlackBerries are not private phones but corporate ones that employees get whether they like it or not. In that light a 47% satisfaction score is not so bad. Suppose all corporate users want to get rid of their BlackBerry, then the overwhelming majority of private users would stick with the platform. And the corporate users have no choice: their IT department will decree that their next phone will also be a BlackBerry.

So this customer satisfaction measurement means exactly nothing, and RIM is in less trouble than some people think.

Greg Rewis did some tests on media queries and not downloading assets.

In my article on media queries and JavaScript, I already pointed out that using display: none to hide elements that should not be shown on mobile is not enough: the element may be hidden, but its content, such as images or Flash movies, might still be downloaded. Over a mobile connection. Not a good idea.

Greg set out to test whether that is actually the case. Sadly, it is. He found:

Thus WebKit is behind Gecko and Presto in this particular respect. The mobile WebKits Greg tested behaved exactly the same as their desktop counterparts.

Turning the cloud inside out

Stephen Hay has an interesting take on the Delicious disaster.

What if we flipped this all on its head? What if we hosted our own data, and provided APIs for all these webapps so that they can use our data? I can imagine that to be a substantially cool use of RDFa/Microformats and whatever metadata/semantic web technologies you prefer. Isn’t one of the points of the semantic web to make decentralized information meaningful, retrievable and mixable?

"define all your background images inside media queries, and you’re safe"

I seem to remember that IE<9 doesn't?

We'll figure that out later. This is about mobile sites.

But I agree a solution will eventually have to be found.

On IEMobile you have to use conditional comments.
<!--[if IEMobile]>
<p>Welcome to Internet Explorer Mobile.
<![endif]—>
<![if !IEMobile]>
<p>All other browsers
<![endif]>

Fair enough, but to me that's a major blocker for a one-website approach.

One of our clients is going with 2 site, 3 tiered approach:

1. Desktop site.
2a. Basic mobile site.
2b. Using queries/scripts to bring in better styles and features for good mobile browsers.

Much as I'd like to recommend a one-web(site) approach, that does seem like the best compromise when the site is quite 'feature rich' / 'heavy', as you can't reliably cut-down resources.

Just a personal note, not related to web development...
I live in Italy, country where BlackBerry started to be popular only since a couple of years. Seriously, in 2008, I did not know anyone having a BB.
In the last year, instead, BBs have become really popular, and not because they are corporate phones; instead, here people go buying BBs themselves!
And, as prepaid plans are the most common things here, we pay for our BlackBerry the full price (a Bold 9700 costs 500€).
They've simply become fashionable, especially among teens and young adults.
In my classes at university, in Milan, I can see 1/3 of students have BlackBerries... And the most interesting thing is that only few of them have a data plan and can use the Internet...
All the others bought BBs mostly because of the QWERTY keyboard.
The most common model is the Tour, and then there are a few Bolds and just a couple of Torches (but they've arrived in Italy only a couple of weeks ago).

Quick question on your third bullet point re: image loading:

I was excited to see the point about Firefox not loading images when they (or maybe their parent el?) is display: none. However, I've been unable to reproduce this behavior - is it only true in a specific version of FF? Does this only apply when the rule is scoped within a media query?

I ask because I've been doing a lot of work on loading images appropriately based on screen resolution (without wasting overhead), and a Firefox workaround like this is all I need for cross-browser support. ( "responsive images": https://github.com/filamentgroup/Responsive-Images )

There are already products that turn the cloud inside out. Single Click Connect (http://www.singleclickconnect.com) allows you to serve your content out of your home network and provides an API for 3rd party clients as well.

I discovered the same behavior last week. WebKit loads background images set up globally and disabled in certain media queries with 'background-image: none'.

One solution that I'm using is to detect whether the browser supports device width media queries[1] and set correct styles with JavaScript on relevant elements if it don't and document.documentElement.clientWidth is larger than certain values.