Yesterday the European Commission fined Google for almost €1.5 billion for unfairly favoring some of its online advertising services over those of its rivals — and it appears the EC isn’t done yet.

One of the ongoing antitrust cases is about Android, and more specifically about Google Services, the package of Google apps such as Play, YouTube, and Chrome that Android-using hardware vendors must either adopt completely, or not at all.

Getting Google Play on their devices requires vendors to adopt Services. That is the reason that almost all non-Chinese Android phones come with Google Chrome installed, even if they have another browser, such as Samsung Internet, on the home screen.

If Google Services is ruled in contravention of EU antitrust rules, that may have an impact on the Android browser market. Google itself sees that as well, and is taking measures. Yesterday, it stated in a press release:

Now we’ll also do more to ensure that Android phone owners know about the wide choice of browsers and search engines available to download to their phones. This will involve asking users of existing and new Android devices in Europe which browser and search apps they would like to use.

(Haven’t we heard this before? Indeed.)

Apparently, the European Commission wants Google to clarify that users can download other browsers. Although this is a good idea when it comes to diversifying the browser market, there are several knotty problems that I don’t see an easy solution for.

Still, it seems European Android users will get a browser choice screen similar to what we saw ten years ago. 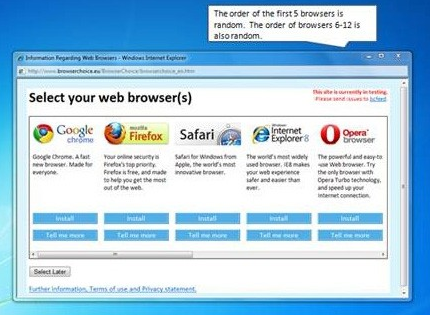 We only have to make the old choice screen responsive, and it’s ready for roll-out. That responsive bit is important: the browser that ends up at the top of the list will likely be selected far more often than the others. Most consumers don’t really care about the choice they’re being given, and a tap is easier than a scroll and tap. Therefore, a random order of browsers seems likely, just like ten years ago.

But which browsers will be selected for the browser screen? Ten years ago it was clear: IE, Firefox, Chrome, Safari, and Opera.

Right now the situation is much less clear. Let’s see:

Besides, who’ll take the decision which browsers to include? Google, most likely, though it is restrained by the EC’s cold staring antitrust eyes in its back. Then again, the EC doesn’t know anything about browsers.

And what if the device’s browser is already something other than Google Chrome? In theory the choice screen would not be necessary there. (Ten years ago Microsoft only offered the choice screen on new computers. But Google explicitly said “existing and new Android devices.”)

And what about WebViews? Here Google’s monopoly is even bigger than with the Google Chrome browser, since there is no choice whatsoever under the Google Services agreement. An extra browser, sure, that’s allowed. A new WebView is not: you must use the Google-provided Chrome.

So there are plenty of detail questions that I dont’t know the answer to. Worse, I’m suspecting Google and the EC don’t, either.

What will the result be? As far as I can recall, when Microsoft offered users a choice ten years ago, not all that much changed in the browser market. Still, we have to consider the possibility of a minor mobile browser market shake-up in Europe.

So let’s make a note of the February 2019 mobile browser market in Europe according to StatCounter:

Let’s revisit this in a while and see if anything has changed. Google wasn’t very clear on when the choice screen would be offered, but I expect it to be somewhere in the next year or so.

But I am not expecting a lot from this initiative — and I suspect that’s exactly why Google is offering it. Still, this episode serves to highlight that dominance in the browser market has now passed to Chrome, and that from a diversity point of view it would be a good idea to do something about that.

The elephant in the room

Finally, we’re left with one elephant in the room: iOS. Contrary to Android, iOS does not allow the installation of other rendering engines. Isn’t that a much worse monopoly than the one Google has over Android? Shouldn’t Apple, too, be forced to give consumers choice?