Why was my head on the front page of Peru’s largest newspaper? What do the Peruvian presidential elections have to do with me? Quite a lot, it turns out — at least, with my Twitter account. Last week it blew up; in a funny way, but still my Twitter timeline was useless to me for four days.

The problem is that one of the candidates is Pedro Pablo Kuczynski, or PPK. You’re starting to see what’s coming next, right?

For years I’ve received a few tweets per month that were meant for Peru’s PPK. Not a big deal, although I sometimes blocked repeat offenders. Last week the tweets picked up considerably, and I consulted the Interwebz and saw a new presidential election is looming, where Peru’s PPK is in third or even second place. It became annoying.

Then, last Wednesday, I made the capital mistake of posting this Tweet:

God, I hope the Peruvian elections are over quickly. Getting tired of people who think I'm a candidate.

It went viral in Peru and overwhelmed my timeline. 1,500 retweets, and I think that doesn’t count the retweets-with-comment. 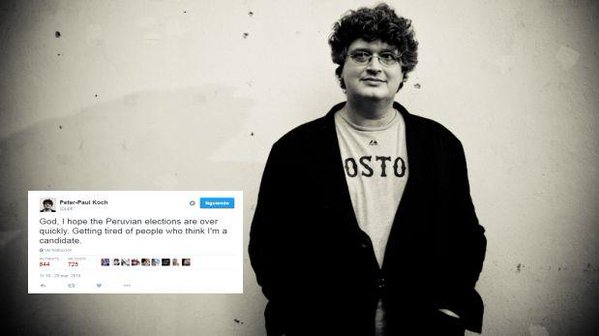 Meanwhile I’ve started to understand the joke: if you’re not really overwhelmed by the Peruvian PPK’s qualities as a candidate, him “saying” he’s getting tired of being considered a candidate is pretty funny. Suppose “@Trump” said that; it would be hilarious.

The overwhelming majority of replies and commented retweets went on in this funny vein; and several people assured me Peruvians also laughed at themselves. Actual attack tweets from PPK’s internal enemies were fairly rare, and mostly in Spanish, which I read only with difficulty, especially when it’s full of abbreviations and slang. There is something with a dog that I haven’t figured out yet, but I’m happy with that remaining a mystery for all time. 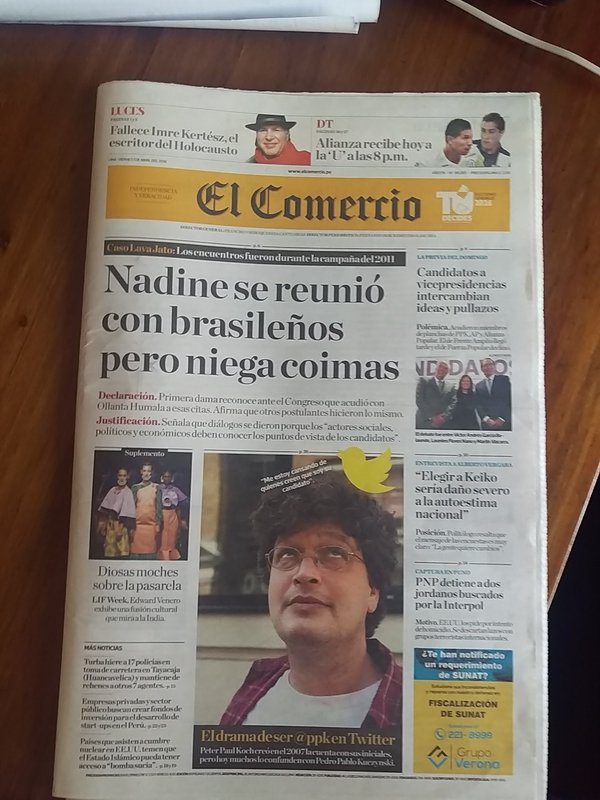 Then a journalist from El Comercio, Peru’s largest newspaper, contacted me and conducted an interview. I still thought the whole situation was pretty hilarious, so I cooperated.

Then it turned out they not only published the interview, but also put an old photo of me on the front page of the newspaper. Apparently the joke was even bigger than I thought. After that, predictably, the tweetstream went on and on and my timeline was still useless.

Meanwhile the stream has abated, and I can use Twitter normally again. Still, in order to let sleeping dogs lie, I will not announce this post on Twitter.

And in case you’re wondering: PPK is also mistaken for the Walther PPK gun, a vegan movement called Post-Punk Kitchen, a Brazilian word for a woman’s intimate parts, and something in Indonesia I haven’t figured out yet. That’s the burden one carries when one has a short Twitter user name, as @sil and @firt can attest.