On Tuesday I delivered the final edits for The Mobile Web Handbook, my new book published by Smashing Magazine. Order it here. 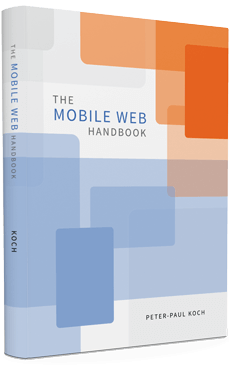 The book is a bit late; it was originally slated to appear in June. However, it’s really done now; you can expect the e-book in about a week and the physical book at the end of September. Right now the only unresolved issues are a few minor styling ones, as well as the index. I expect both to be solved somewhere next week.

Writing a book about the mobile market and the mobile web is tricky. Circumstances change faster than I can keep up with even on a blog, let alone in a book that’s already slightly outdated by the time it reaches the consumer. That’s why I decided to talk about mobile web fundamentals such as the viewports and touch events, as well as the browser market, especially the Android one. These topics will remain important in years to come, even though browser compatibility patterns will continue to shift. The gory compatibility details are on the companion pages (work in progress; not ready yet.)

Here’s the table of contents:

In general, and with my financial well-being in mind, I’d say everyone who reads this should buy it. That especially goes for web developers who want to understand mobile browsers and the mobile web more than they do today.