A friend of mine bought a fairly cheap (so probably not-too-new) Samsung smart TV to watch football, then promptly went on holiday with his family and asked me to feed the cat. In return I demanded the remote for the TV, and the manual (which turned out to be useless). So here’s my report of my first ever smart TV browser test.

Samsung’s interface where you steer a cursor by means of the arrow keys on the remote is atrocious. That’s odd, since Nokia solved this particular problem ages ago. When a Nokia cursor moves across the screen, it “snaps” to links and other clickable items, making it easy to use them. Samsung’s cursor does not: you have to be in the right spot in order to click on a link.

The cursor acceleration is also annoying, because it starts way too slow and then accelerates too much. Subtle cursor movements are not really possible. It took me about three minutes to type in the URL of my site. That’s not good.

Fortunately you can switch to link navigation, in which the arrow keys on the remote jump to the next link in the indicated direction, or scroll if there isn’t any. This solved my problems and allowed me to test stuff seriously. How many consumers will figure this out, though?

The TV is a Samsung, and as I discovered earlier, Samsung has been using Chrome on its Android phones from the S4 on. Apparently they’ve made Chrome the default browser for all their more-or-less modern smart devices — something I had not found evidence for before running this test.

Fortunately my CSS Units and Values and Images and replaced content compatibility tables were created in the days of Chrome 25, so I have some material for comparison. (Yay for not updating compatibility tables!) It turns out that Samsung Chrome 25 supports what I call the new syntax for gradients, calc(), the ch unit, and the vmax unit, none of which were supported by Google Chrome 25. A quick check on caniuse revealed that these features have been supported from Chrome 26 on.

An additional clue is the TV browser’s support for the mouseenter event, which according to MDN was added to Chrome 30. So Samsung Chrome 25 contains features from Google Chrome 30. You see, I hope, the outlines of the next fragmentation problem. Chrome is splitting up into several branches, version numbers do not offer enough clues, and Google seems to ignore the problem.

The browser does not support touch events, which is correct, given that the TV does not have a touchscreen. Then again, the browser fires the mousewheel event when you scroll, even though the remote doesn’t have a wheel.

Thus the meta viewport tag kind-of works, but unfortunately the ideal viewport — the value set by the device-width keyword — is 1280px, which is WAY too much. 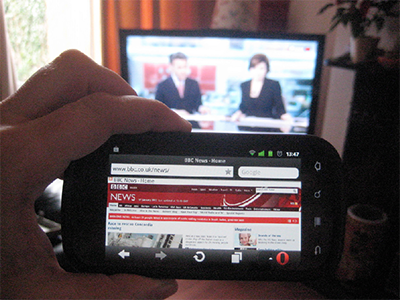 In certain ways a TV screen is about as large as a phone or tablet screen. It’s bigger in centimeters, but it’s also further away from your eyes, and as a result it shouldn’t have a desktop screen resolution. The Samsung TV fails spectacularly here: text in responsive designs, and even old-fashioned 1024px-based ones, will be absolutely unreadable from standard TV-viewing distance when the total site width is 1280px.

I experimented with the zoom settings, and found that at 980px the text was still too small, but at 640px it was slightly too large. I’d say 768px (iPad portrait) would be in the right ballpark for this particular TV. A small tablet size, in other words. Patrick Lauke told me this ages ago, and now I’ve seen it for myself.

From my first test it’s clear that the major problems with this Samsung TV (and likely many others) are the lousy interface and lack of support for a 768-ish ideal viewport that will allow text to be read from TV-viewing distance. Until the browser makers solve these issues consumers don’t have the slightest incentive to browse on their TVs, which saves us the trouble of using browser detects. Win-win.

Now that I’ve written this down I have plenty of ideas for more tests, and I have to feed my friend’s cat several times more. So I’ll likely publish a new set of findings later on.