Today’s hot story seems to be the supposedly Google-initiated howtogomo.com website. I heard some complaints, and decided to take a look myself.

First comes a kind of load script that takes bloody ages. This is supposed to be a feature, and not a bug. Ahem.

Then I noticed that the links don’t work. Nothing happens. Until I resize the browser window, that is. Then suddenly new content appears. And I’m using Chrome, which is, like, Google’s browser. One would assume Google would test its stuff in its own browser ... wouldn’t it?

I must admit the site does work in Firefox.

Then the site features a fairly short list of agencies that can help you create mobile web sites. I know about one third of the names in them, and have no reason to question their technical prowess.

But why would Google create such a list? And especially take the flak from the thousands of companies that were left off the list? Hell, I was left off the list, as are several high-profile and scarily smart mobile web developers I could mention. So what gives? Where can I lodge a complaint?

Then there’s a testing tool for your site. Of course I immediately tried it out on my own, and the result is total bullshit. I have studied my homepage in over twenty mobile browsers, and none of them displays it as the screenshot does. 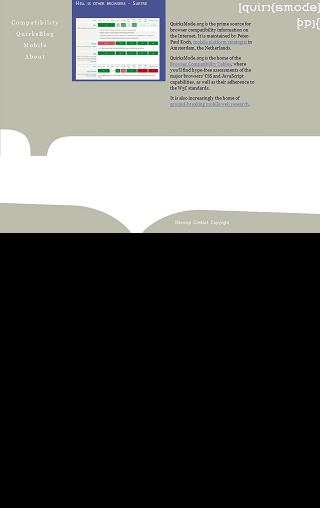 That’s because I set the height of the HTML element to 100% of the viewport with JavaScript. Apparently the site checker doesn’t execute JavaScript, which is a serious omission. Script-generated content and styles may make the difference between future-friendliness and crap, after all.

Initially I planned to make screenshots of the site in various mobile browsers to see if they practiced what they preached, but after this copious amount of sheer idiocy I can’t be bothered.

In fact, I do not believe this site was created by Google at all. Both the technical crappiness and the marketing drivel point in the direction of other, not very clever, parties.

So who’s abused the Google logo? Google, how about sicking a pack of bloodthirsty lawyers on them?