Last week I updated the Mobile WebKit comparison table with four browsers: Safari 4,2 (on iPad), Android 3 (on Samsung and Motorola tablets), the BlackBerry PlayBook browser, and the WeTab browser.

The WhatTab? The WeTab. You probably haven’t heard of it, unless you’re in Germany. Bear with me.

A while back I did a strategic session with Vasilis: I could use the iPad and Android tablets he had access to, and in return he could play with the PlayBook and WeTab. So I haven’t tested the iPad and Androids exhaustively; I merely went through my series of tests and made notes.

All four tablet browsers ended up in the top-five of WebKit-based mobile browsers, with BlackBerry 6 (the first WebKit-based one) being the fifth. In general Apple, Google, BlackBerry, and WeTab vendor 4tiitoo did a solid job when it comes to browsers.

The Android tablets were the new Samsung Galaxy (the 10 inch with Android 3.0) and the Motorola Xoom (also Android 3.0). The most interesting conclusion I drew was that there was almost no difference between these two, except for the home screen. The browsers behaved absolutely the same, and the interface, notably the Back buttons, looked exactly the same, too. In other words: Google is serious about keeping a firm grip on all Android 3 tablets.

Google itself, developers, and possibly consumers love that kind of grip. Device vendors and operators hate it, since they want to differentiate themselves. If the Galaxy and the Xoom are exactly the same, what’s their point (from Samsung’s and Motorola’s perspective)? Here we see the fundamental weakness of the Android ecosystem at work.

Browser-wise they are pretty good, though. Visual viewport size is finally supported, and a host of minor bugs were removed.

The kind people from RIM gave me a PlayBook to play with. I did so; I also borrowed it to a few friends, and on the whole it performs well. RIM borrowed some webOS concepts, notably swiping an app thumbnail up to close it. All in all the UX works well.

Browser-wise the PlayBook has improved over the Torch. As far as I understand the PlayBook browser is basically the one that’s going to run on BlackBerry OS7 when it’s released — probably with a few bug fixes and new features.

Still, I have two problems with the PlayBook, both (duh!) browser-related:

I would like all browser screens to be separate cards (to borrow a webOS concept), just as on the Palm phones. Right now all browser tabs are in one card, and that doesn’t work for me — or for anyone with a lot of browser tabs open.

In general the PlayBook is too picky when it comes to clickable (touchable) areas. In the browser the touchable area of a link is slightly too small, resulting in mis-touches. This happens both on the PlayBook and on the Torch.

The PlayBook also has this problem in the general UX. During the tests I had it lying flat on my desk, and I was unable to touch certain elements such as the battery indicator. When I tried to touch them, I (apparently) touched their neighbours instead.

Even weirder was that I could not properly interact with the browser while the PlayBook was flat on my desk. If I touched a link, the browser interpreted it as a scroll or a zoom. Holding the PlayBook in my hand and tilting it a bit solved the issue, but it’s still strange. 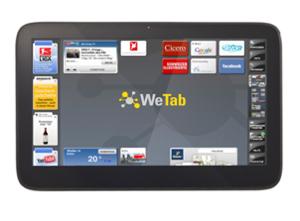 In March I was at a conference in Munich where I encountered my first MeeGo-based devices: an Intel tablet (which I’ve frankly forgotten the name of) and the WeTab. Of course I immediately started up the browsers. Both were WebKit-based, and the WeTab one was clearly superior to the Intel one. So I requested, and recently received, a test device.

The WeTab is made by 4tiitoo and is for sale only in Germany, Austria, and the Netherlands. I later heard that the German launch did not go very well. (I forgot the details, and the launch was not Dutch news).

Taken as a whole the WeTab still has issues. It doesn’t always react well to touches: there are too many instances where I have to touch an element twice in order to get the desired reaction. Orientation change is also ugly: the screen goes dark and is then restarted in the desired orientation.

The interface is cluttered, but nonetheless contains some interesting ideas. The best idea is to put a lot of interface elements in narrow columns on the left and right side of the (landscape-oriented) screen. I haven’t seen this anywhere else yet (but my tablet experience is limited) and I think it’s a good idea.

As to the interface elements themselves, there are too many of them, but I’m fairly certain that about 10-20% of them are good ideas. The problem is that I don’t know which 10 or 20%.

Still, it was the browser that drew my attention, and it didn’t disappoint. It supports the visual viewport dimensions — in my book an extremely important feature. It also takes a stab at multitouch, and even though it doesn’t work quite properly on the WeTab, it only works properly on iOS anyway, so there’s no shame attached to it (yet).

Anyway, I advise anyone who needs a good browser for MeeGo to contact 4tiitoo.